Funny Girl- Debbie Sue Goodman- will perform ‘An Evening of Comedy and Music; from 7 to 8:30 p.m., Aug 22, at Let Them Eat Chocolate, 5360 N. Damon Ave. Goodman– Author of the books, ‘My Husband the Stranger,’ & ‘Still Single’ and ‘Still Dating’– told me she’ll have some comedians there and a guitarist. There’s no cover charge. ‘The audience can expect an evening on fun and laughter and they have great chocolate there!’ said Goodman who will also appear Sept. 12 at Space in Evanston, with a few other comics. ‘I tell my dating jokes, some family jokes, and do my usual celebrity impressions of Liza Minnelli, Carol Channing, Judy Garland, Ed Sullivan-etc. We have a fun time there.’

Comic/author Debbie Sue Goodman signing My Husband the Stranger at the Barnes & Noble at DePaul University at noon today.

“My Husband the Stranger,” “Still Single” AND “Still Dating,” the provocative books by Debbie Sue Goodman, will be discussed and she’ll sign copies at the DePaul U. bookstore from noon, June 23.

Comic Debbie Goodman does a show Jan 14 at the Heartland Cafe’ based on her experiences as a single in Chicago.

Comic Debbie Sue Goodman signing her My Husband the Stranger book at Borders in Evanston on Friday.

Comic Debbie Sue Goodman has a new book out. My Husband the Stranger, and will tickle your funny bone Sept. 24 at the Heartland Cafe’, 7000 N. Glenwood Ave.

Is Being Single Funny? It is to local comedienne Debbie Sue Goodman, who gets laughs in her stand-up routines based on her two books she wrote: Still Single and Still Dating. A pretty brunette, she keeps ’em giggling and gets males’ attention, but so far she’s still available. Debbie Sue has been an extra in many movies made here and she’s a popular radio and TV guest.

Comedienne Debbie Sue Goodman, author of Still Single and Still Dating, will do her stand-up routine Jan 27 at CJ Arthur’s Bar and Grill in Wilmette.

For singles is July 30 in the Drake Hotel’s classy Palm Court from 7 to 9 p.m. with comedienne Debbie Sue Goodman dishing about the meet market scene.

LOL…Funny Girl Debbie Sue Goodman will surely crack’ em up from noon to 1 p.m. Nov 17 at Gilda’s Club, 537 N. Wells St. There’s no cover charge for Goodman’s comedy performance, which is based on her two books, Still Single and Still Dating.

Author/Comic Debbie Sue Goodman will perform and sign her latest book Still Dating at Gallery 659 in Glencoe on July 1.

“Still Performing…is funny gal Debbie Sue Goodman, who will hold a fundraiser comedy performance based on her two books, Still Single and Still Dating at 7:30 p.m. May 19 at St. William Parish, 2550 N. Sayre Ave. The show is called, “Raising the Roof,” to raise money for a new roof for the church. Tickets are $8 in advance and $10 at the door…”

Vivacious Debbie Sue Goodman of Skokie is still out there looking for “Mr. Right.” Five years ago we introduced you to Goodman when her book, Still Single came out. She was so attractive and personable that we were certain she’d be married by now. Turns out, as the title of her second book proclaims, Goodman is Still Dating.

And when she isn’t working at her day job, she is making other people smile by sharing her tales of woe. “I’ve been doing a lot of comedy clubs and appearances at charity events.” Goodman reported. “I was at Gilda’s Club in Chicago and I did an event for Hurricane Katrina at the ImprovOlympic in Chicago.” She has also performed for women’s groups, senior groups, and singles groups, and appeared on radio and TV.

In addition to relating to her dating experiences at performances, Goodman is likely to burst into song, sometimes doing impressions of Judy Garland, Ethel Merman and Liza Minnelli. “I have a great little show that I do.” Goodman declared. “I do a little Ed Sullivan, too.

Goodman noted that it isn’t only women who relate to her dating horror stories. “A lot of men come up to me afterwards and say they’ve gone on dates that were similar.” Goodman remains upbeat. “You have to keep moving on. I’m having the best time.” She added, “I’m meeting a lot of nice people.” Some of them are giving Goodman ideas about where to meet men.

That’s why you might run into a bubbly, dark-haired woman with a broad smile hanging around the produce department at your local grocery store.

Some of those laughs could be provided by local comedian and author Debbie Sue Goodman, who performs comedy routines based on her book, “Still Single.” For singles, Goodman advises staying inside, cooking dinner at home and taking to heart such songs as “Baby It’s Cold Outside” and “Light My Fire.” And she recalls, one date she had with a guy who had no heat in his car.”We were like icicles, and then he rolled the window down. I wanted to go to a restaurant close by because I was so cold, but he wanted to go to one miles away.” When they got there, “he told the waiter it was too warm and asked him to turn the air on.” Needless to say, there was no second date.

“A Single-ular Sensation”– Skokie Woman’s life is an open book.

One of the men Debbie Goodman went out with didn’t use silverware, even when he
ordered spagetti. Another insisted that she dress only in plaid on their dates.

Goodman’s friends used to tell her that her dating experiences could fill a book. She
decided to take them at their word. The result is “Still Single,” a hilarious compendium
of Goodman’s search for a nice guy that has become a hit through word of mouth in
local bookstores and made Goodman a celebrity in her native Skokie and elsewhere.

When she answers some singles ads, she finds that “there must be a rule that (men)
are not allowed to place a singles ad unless all their clothes don’t match… “If they place
an ad and they’re looking to meet someone, I don’t think a red shirt, yellow tie and
brown jacket are the answer.”

She meets and falls for an older man who finally tells her that they have to stop
seeing each other because she reminds him too much of his daughter. She sends
him a card: “Enjoyed our time together. I need my college tuition by next week.”

Goodman’s dating experiences haven’t dampened her enthusiasm for life a bit. She
remains ever hopeful on the Mr. Right front, too. “I’m sure that someday somebody
nice will come along,” she says.

But is somebody whose tie matches his shirt too much to hope for?

“Need a good laugh”… Funny lady Debbie Sue Goodman, author of “Still Single,”
which tells of her dating woes, will perform a comedy act based on her stories with a
book signing to follow at 8:30 pm, Friday Nov. 8th at Miska’s Backroom, 2156 W.
Belmont Ave.

Women telling dating horror stories is about as common as men thinking about women.
Relationship guru Debra Goodman will be appearing at Seventh Heaven Cafe,’ 4904
Oakton St. in Skokie, at 8:30 pm to sign her book “Still Single” and do her stand-up
comedy routine about singleness.

Author/Comedian Debbie Sue Goodman will appear one night only at Zanies Comedy
club on North Wells on April 16 with her stand-up routine based on her hot new book,
“Still Single.”

Still Single with a sense of humor, pretty Debbie Sue Goodman has an engaging book,
“Still Single,” about the men she dated, her family, her pets and her view of this crazy,
wonderful world. She offers stories, poems, songs that are poignant, funny, unique.
Debbie also an actress and songwriter, plays the guitar and piano. Debbie’s book is
$9.95, available at bookstores or barnesandnoble.com

Writer looks for Mr. Right.. A vivacious, energetic, attractive young Skokie
woman is seeking a nice guy. What she has been finding could fill a book. That’s why
Debbie Sue Goodman wrote “Still Single,” a compendium of her worst dating
experiences.

To meet Goodman is to like her, which might explain why she has been asked out
by men in such unlikely places as the post office. Of course, that didn’t work out.

“He was mailing out resumes because he told me he was fired from his last four jobs,”
Goodman said. He also told her he didn’t have a phone. Then he got lucky and called
from a pay phone to tell her he got a job. “I can take a bus to meet you because my car
was repossessed.” Even though he had a stack of bills, he wanted to take her on a
date– for a walk. She passed on that offer.

Goodman’s biggest fan is her mother, with whom she lives in a sprawling home
decorated with landscapes painted by her mother who studied at the Art Institute.

Debbie Sue Goodman, from Skokie, IL performs a one-woman comedy show based on her best selling book, Still Single, which includes many humorous and heartwarming stories about Debbie’s life. Debbie is an actress/lyricist/vocalist/impressionist, and has appeared in many cable TV shows. Debbie has also made numerous guest appearances on Chicago TV & radio stations and author appearances and book signings.
The Open Books team feels fortunate to have been contacted by her and will be inviting her to share her talents with us for a future Comedian/Improv event once our store is open.

Enjoy her answers to The 10 Questions We Always Ask

We thank Debbie for sharing her time with us! 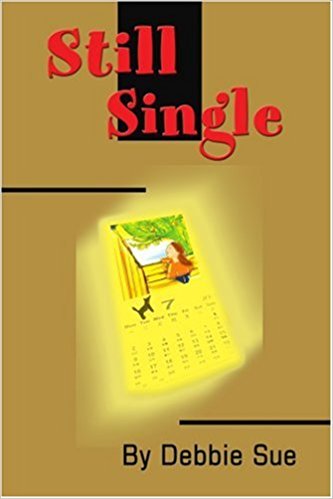 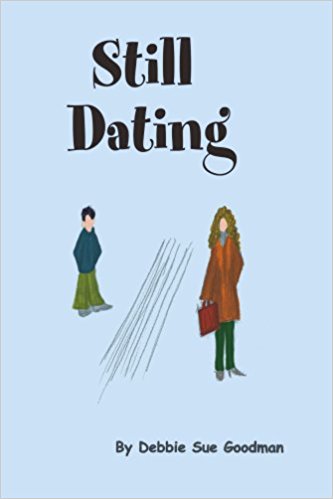